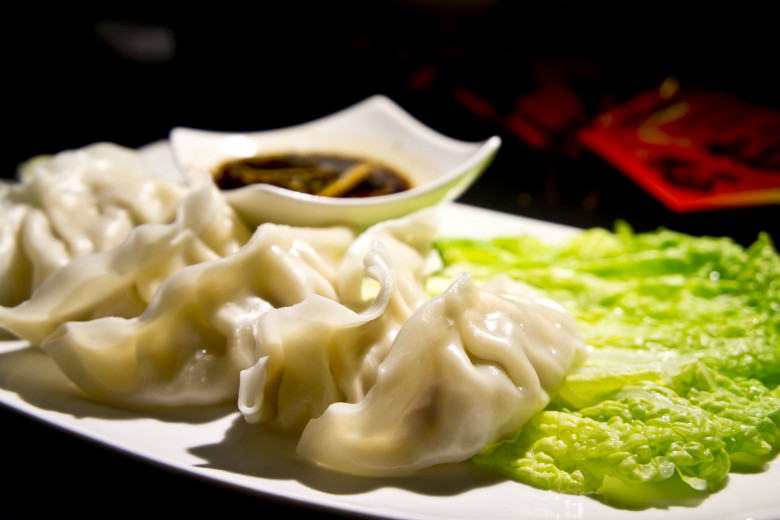 Jiaozi (pronounced JOW-zuh) are one of many symbolic foods eaten during the Chinese New Year. The jiaozi symbolise prosperity and wealth since they resemble the long boat-shaped silver ingots that were used as an ancient Chinese currency. It is not uncommon for people to put a coin into one of the dumplings for one lucky person to find – whoever finds it will have the most luck in the coming year. Jiaozi is a fairly straight forward recipe to make at home under one condition: that you have an Asian store nearby that sells dumpling skins. I have made dumpling skins at home but it significantly increases the amount of work as they are pretty labour intensive. If you’re feeling industrious feel free to look up a recipe for the skins but for this recipe we will assume that you have bought some. For the dipping sauce, the most basic would be soy sauce, a bit of white vinegar, and some minced garlic and ginger, but feel free to try anything else you like. It is also very common to add chili oil to the sauce if you like it spicier. However you choose to enjoy them be sure to make enough because they are incredibly addictive and will keep you wanting more!

1) Boil the chopped cabbage for a few minutes until it is soft and then drain and squeeze as much water out of it as you can, the dryer the better.

2) When the cabbage has cooled to room temperature, mix all the ingredients together until a until they are evenly mixed together and can be scooped as a "dough".

3) To create the dumplings, take a dumpling skin in one hand, and place a heaped teaspoon of filling into the center of it. Don't worry about folding pleats or anything fancy into the dumpling, just squeeze one side against the other to achieve a half-circle shape. Try to get all of the air out of the inside of the dumpling, and if the sides don't stick together well you might need to moisten the edges a bit before try to seal it.