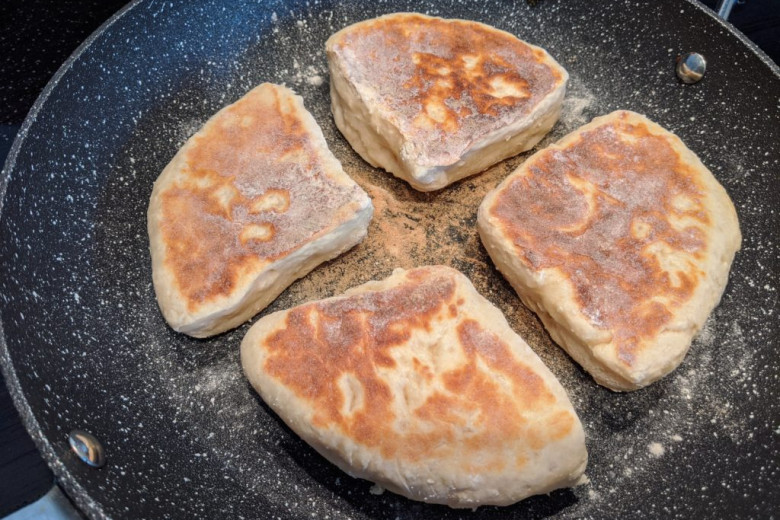 Ireland is probably more well known for its drinks than its food. In the north of Ireland, the national dish is the Ulster Fry. That’s fried bacon, sausages, fried egg and a bit of potato bread and soda bread farls. Though the quality of Irish bacon and sausages shouldn’t be under-estimated, it’s the breads that make it unique. This bread is cooked on a griddle rather than in an oven. It was designed to be something that could be made quickly if guests popped in unexpectedly for a wee cup of tea – this happens a lot in Northern Ireland. Tip: If you don’t have a griddle, the thickest pan you have will do. If it’s small, you might have to make your farls in two batches.

1) Put the griddle/pan on a medium/low heat.

2) Pop the flour and salt in a bowl. sift in the baking powder and mix it up. Make a well in the middle with your finger and pour in the milk.

3) Once you get a sticky dough, knead lightly for a few minutes.

4) Make a ball with the dough and flatten it so you have a circle about 1cm thick. Cut this into quarters with a floured knife.

5) Put each of the quarters into the pan with a bit of flour.

6) Cook each side for about 6-8 minutes. You may need to turn down the heat – as you want to avoid overcooking the outside, while the middle is still doughy.

7) Remove the farls from the heat and let them sit for 10 minutes.